May 01, 2020
Bottom Line: An app that offers the players an amazing opportunity to explore the different kinds of weather and learn about its changes in terms of temperature, wind, and sun while interacting with animal characters. 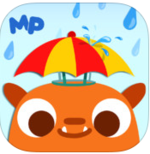 MarcoPolo Weather is a great app for kids to explore the weather and its changes with lots of fun learning experiences. Kids can control and change the weather conditions like temperature and wind in a fun and interactive manner.

There are four cute and fun characters in this app: Gorbie, who is a hippo and looks more like a goofy monster, Scout, who is a small bear with huge ears, Willow, who is a big-haired pink rabbit, and Nash, who is a ram. Each character has a distinct personality and food preferences. Kids can select these characters along with their clothing from the toolbar at the bottom of the screen. 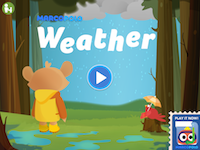 Once you select the desired character in the main play space, you can control the different weather types and see the character’s reactions. The icon on top of the screen allows you to control the weather type, temperature, and day or night mode as well. The various weather conditions can be introduced to the user by using the icons on the top. It is a great way for kids to learn about the different temperatures while watching the characters react to the weather condition. Users can change their clothes accordingly as well to make the little creatures comfortable.


To change the weather, tap on the sun which is at the top of the screen. There are a total of nine kinds of weather to choose from, four of which are free and the rest require an in-app purchase. Once the user selects the weather, it runs until it’s changed. The weather ranges from typical conditions i.e. sun, clouds, rain to extreme weather conditions i.e. tornadoes and hurricanes. 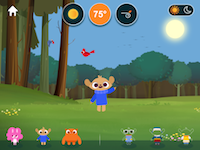 The temperature can be switched as well by simply moving the slider from blue (cold) to red (hot) and from Fahrenheit to Celsius. The weather and temperature have to be in sync as well. For instance, if you turn up the heat, the winter weather snowmen and igloo melts. Likewise, the option of hurricane is not applicable with a temperature of 30-degree F or below. The weather changes to rain from snow when going from 30 to 40 degrees F.

The app also offers four wind speeds for the user to explore. In a heavy wind, everything blows away. The sky changes as well from day to night. Each of these areas operates independently but are interdependent.

The bottom toolbar provides lots of fun elements in the game. Each of the characters has a range of clothing options, three to be precise, at a time. If the clothing choice is not weather-appropriate, the characters make little sounds of discomfort prompting the user to make changes to its clothes. 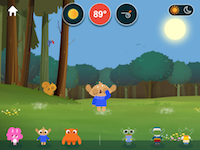 The bottom toolbar also provides three food choices for each character like cabbage, some greens, and carrot for the bunny and hay, some greens, and apple for the hippo. There are also flowers available to plant and various playthings including a pinwheel, tent, snowman, picnic basket, umbrella, kite, and snowball. These fun elements change depending upon the weather thus teaching the kids while engaging them in play.


Apart from the play that goes on the screen, this app also shares small facts throughout, such as “there are seven colors in the rainbow, and they are always in the same order” or “hurricanes revolve clockwise in the southern hemisphere and counterclockwise in the northern hemisphere”. A voiceover also offers some basic information on the meteorological conditions and their way of measurement. 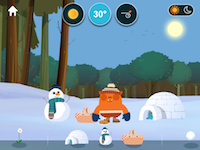 When selected, the weather, wind speed, and temperature conditions are narrated for the user. However, it would have been better if items could be named. Also, all the main characters have their respective names and personalities but it would be better to hear a little more about each of them. The other interactive elements and the little creatures that pass through like an owl, a squirrel and a raccoon are also not named. It would be better if the app provided the user an option to name them.


Similarly, a little more explanation about the type of clothing would also help the child learn. If explained, children could readily understand why Scout is shivering while wearing a beach outfit at -5 degrees or why Gorbie is sweating while wearing a woolen cap and mittens at 30 degrees.


A detailed narration about these situations could help the children learn more. However, teachers and parents who use the app with their children could include the additional narration on their own.


You can find six language options — English, Chinese, Spanish, French, Japanese, and Russian. The sounds produced by the characters are universal like yawns, gasps, and giggles. Therefore, regardless of the language option, these non-verbal cues remain the same. The provision to turn the voice-over and sound effects off is also available. There is also a recommendation for weather-themed reading and several other suggestions for real-world activities.

In short, MarcoPolo Weather is a great app for the kids to explore the weather and its changes. It is a great way for the kids to learn the cause-and-effect science that is useful to carry over into real life. It is designed for kids aged 5 and under but those above 5 could enjoy this free play as well.

You can download & install the app using the link below

This post is published on apkdownload.in - one stop destination for finding top android apps and games.